Airport is located in Romulis, Michigan - approximately 20 miles from the City of Detroit, and close to Interstate Highways 94 (Exit 198) and  I-275. J.D Power & Associates ranked Metro Airport, among large U.S. airports, as number one in terms of overall customer satisfaction. Metro

Checkpoint savvy - Anyone may use the security checkpoint at the Westin Detroit Metropolitan Airport in the McNamara Terminal. Hours: 7:45 a.m. to 7 p.m.

Freedom Center military lounges are at D-17 (North Terminal) and A-43 (McNamara Terminal).

Complimentary Wi-Fi is available after viewing a 30-second advertisement & power stations with USB-charging plugs are in all gate areas.

The Westin Detroit Metropolitan Airport (McNamara Terminal) offers a $15/day pass to non-guests for use of the pool and workout room.

Indoor pet-relief areas are located near Gates A-34 and the international arrivals (McNamara Terminal) and D-17 (North Terminal).

Directions to the Detroit Metro Airport (DTW) from the Interstate I-75:

Directions to the Detroit Metro Airport (DTW) from the Interstate I-94:

Important roads nearby include the I-94 interstate (Edsel Ford Freeway), which runs in an east-west direction, intersecting the I-275 highway to the west and the US-39 (Southfield Freeway) to the east.

On the eastern side of Detroit Airport you will find the Middlebelt Road, while Eureka Road borders the southern side and leads to the John D. Dingell Drive, which dissects the grounds and also joins the William G. Rogell Drive. 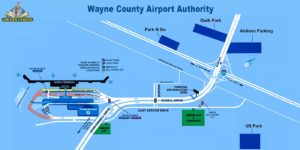 Detroit Metropolitan Airport (DTW) has two terminals: McNamara and North. Delta and its SkyTeam partners Air France, KLM Royal Dutch Airlines and Virgin Atlantic operate from McNamara Terminal, while all other airlines operate from the North Terminal. Visit the Airlines section for a list of DTW airline terminal locations and contact information.

If you have baggage to collect, take the elevator/escalator down one level to Baggage Claim. At the bottom of the escalators, check overhead monitors to find the Baggage Carousel for your flight. All baggage carousels at DTW are shared among airlines, so be sure to look for your arriving flight (listed in alphabetical order by the city you last departed).

The McNamara Terminal, is used exclusively by Delta, Aeromexico and Air France.

This terminal has three concourses, A, B, and C, which house 103 gates with shopping and dining in the center of A concourse (known as the Central Link), as well as throughout the concourses.

A Four Star Westin hotel is connected to the A concourse. Additionally, overnight guests at the hotel who are not flying can obtain a pass to enter the concourses to visit shops and restaurants.

The North Terminal, the terminal is considered the D Concourse of the airport: PARK 'N FLY - A Better Way to Park at the Airport

When it comes to parking at the airport, proximity doesn't equal convenience. Travelers often have to hunt for parking, haul their luggage for miles through a dark parking lot and pay high fees for the "convenience."  At Park 'N Fly, we offer More than just parking™ with our great service and convenience.  We pick you upat at your car in 5 minutes or less and drop you off right at your terminal.  It's a lot more for a lot less, with no walking and no hassle. In addition, many of our lots offer special services like car washes, oil changes, pet boarding and much more.

Go where no non-traveling hotel guest has gone before with the Beyond the Screening Checkpoint Program. This program allows registered overnight guests at The Westin Detroit Metropolitan Airport to access to the shops and restaurants in the McNamara Terminal.

Welcome to the Holiday Inn Detroit Metro Airport hotel located in Romulus, Michigan. This airport hotel is located less than 1 mile from Detroit Metropolitan Airport (DTW) and only 20 minutes from the heart of downtown Detroit.

Nearby tourist attractions include the Henry Ford Museum, Greenfield Village, and Detroit Institute of the Arts (DIA).

At this airport hotel you'll find amenities and services to enhance your stay, including mini-fridge and microwave, free high-speed internet access, and the Sporting News Grill. Relax and enjoy our indoor pool or stay fit at our state-of-the-art fitness center. At the Holiday Inn Detroit Metro Airport, we'll make your stay one of the most memorable.